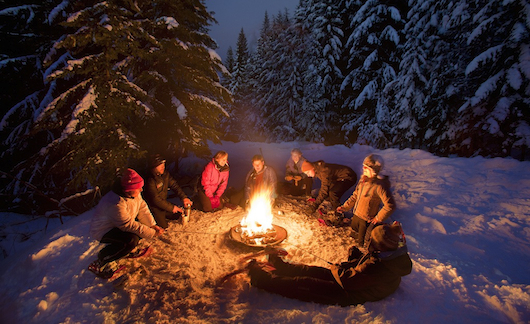 How ‘hygge’ can help you get through winter

The vague cultural concept doesn’t translate easily into English, but it has helped Denmark become the ‘happiest country on Earth’ despite long, dark winters.
Denmark endures dreary winters with the help of an arcane cultural concept known as “hygge.” It’s not an easy word for outsiders to pronounce — it sounds sort of like HYU-gah — and it’s even harder to translate. Hygge apparently has no direct analogue in English, and related words like “coziness,” “togetherness” and “well-being” only cover a fraction of its nebulous definition. Still, in hopes of shedding light on Denmark’s world-class happiness, here’s a closer look at the hazy nature of hygge.
Hygge, originally a Norwegian word for “well-being,” first appeared in Danish near the end of the 18th century, according to Denmark’s tourism bureau. It has evolved into a big part of Danish life since then, absorbing connotations over time like a semantic snowball. The dark winters of Denmark helped turn hygge from a mere word into a kind of cultural panacea, manifested in various ways to buffer Danes against cold, solitude and stress.
“In other languages the word for hygge or coziness is more a physical thing, and hygge is more a mental thing,” explains Lotte Hansen, a library science student from Aalborg, Denmark, who’s interning at the Museum of Danish America in Elk Horn, Iowa. “It’s like a feeling, and it’s big at Christmastime. The candles, the food, being with your family.”
“It’s not only Christmas, though,” she adds, noting hygge is a pervasive, year-round spirit. “It’s like a mood you have. We can see hygge in many things, in many situations.”
This flexibility of hygge is a major reason why English words like “cozy” don’t do it justice. “Coziness relates to physical surroundings — a jersey can be cozy, or a warm bed — whereas hygge has more to do with people’s behavior toward each other,” writes author Helen Dyrbye in “Xenophobe’s Guide to the Danes.” “It is the art of creating intimacy: a sense of comradeship, conviviality and contentment rolled into one.”
To read more click on the link at the top!