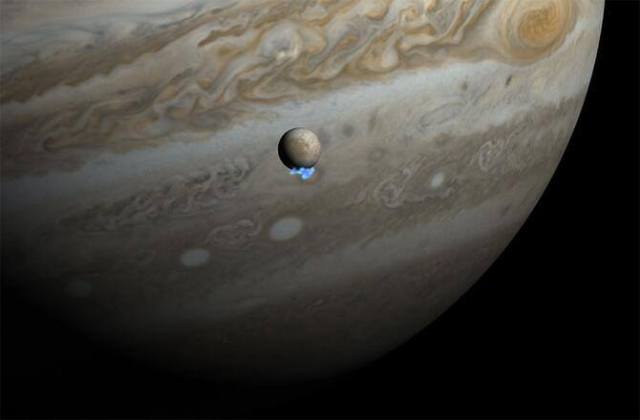 This science is so exciting that I’m mad it took me this long to get to my laptop and write it. Some incredible results were presented Thursday morning at #AGU13 from the Hubble Space Telescope team at NASA and ESA: Europa, one of the ice-covered moons of Jupiter…is erupting.

Right now, there are geysers of water erupting from Europa. Let that sink in for a second and then read on.

We already knew that one moon in the solar system had active geysers; Enceladus, which orbits Saturn. Enceladus is a small, ice-covered body with giant cracks at its south pole. The Cassini spacecraft, currently orbiting Saturn, discovered a few years ago that giant plumes of water were shooting from those cracks.

Tidal heating is very important in systems with multiple moons. In the moons of Jupiter, for example, tidal heating supplies the energy to run the gigantic volcanoes of Io. Several other moons of Jupiter, like Ganymede and Europa, are also ice covered, and missions such as Voyager and Galileo discovered that Europa’s surface is covered with the remnants of giant cracks.

Those cracks suggested that there might be liquid water beneath the ice sheet of Europa; an ocean, heated by tidal interactions with Jupiter.

Europa is a big moon, its radius is nearly 6 times that of Enceladus, so it takes more energy to heat a place like Europa. If Europa had an ocean, that ocean has existed for millions of years, maybe enough time for life to evolve within it.