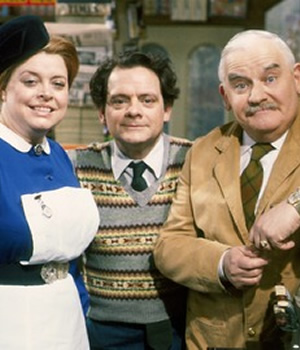 From The British Comedy Guide:

Open All Hours, the hit BBC sitcom that originally starred Ronnie Barker as tight-fisted shopkeeper Albert Arkwright, is to return to screens this Christmas with a brand new episode.

Written by Roy Clarke, the half-hour 40th anniversary special will be the highlight of BBC One‘s Christmas schedule, and is expected to broadcast in a prime-time spot on Christmas Day.

David Jason, who co-starred alongside Barker as his put-upon nephew and sole employee Granville, will become the central figure in the special, following Ronnie Barker’s death in 2005.

Jason said today: “I’m really excited to be bringing back Open All Hours. I am sure there is an audience out there who would like to see what Granville has been getting up to in the corner shop. It will be a great family show for Christmas and a fitting tribute to the legacy of Arkwright.”

Writer Roy Clarke said: “This has been fun – a great opportunity to work with David Jason again and to suggest how things at that corner shop might look today.”

The sitcom was originally broadcast over four series from 1976 to 1985, following a 1973 pilot. It focussed on the miserly Arkwright, stuttering proprietor of a small but well-stocked end-of-terrace grocer’s shop in Dalby, South Yorkshire. His desire to maximise profits lead him to keep the shop ‘open all hours’ he can, constantly trying to foist unnecessary purchases onto his unsuspecting customers and concoct new and novel ways of marketing his goods and dispensing his services whilst investing as little money as possible – usually at Granville’s expense.

The new special, titled Still Open All Hours, will see Granville now running the shop alongside his own son. Lynda Baron will return, as will Maggie Ollerenshaw, as Mavis, the customer who always troubled Arkwright with her indecision.

Mark Freeland, head of the BBC’s Comedy production department, says: “I am absolutely delighted to welcome back to BBC comedy the magic pairing of David Jason and Roy Clarke. Having the chance to see Arkwright’s beloved shop again, now run by Granville, I hope will bring broad grins to lots and lots of faces at Christmas.”